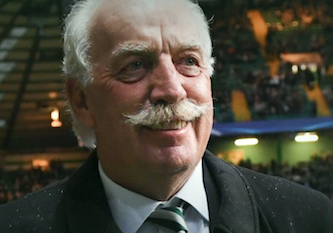 Celtic plc principal shareholder Dermot Desmond has announced that his shares in the company “are not for sale” in an exclusive interview with the official Celtic website.

Desmond said any suggestion he is not a “true fan” of Celtic is “contemptible.”

He said the company recognises “that we have under-performed both on and off the pitch and must do better.”

Celtic plc shares, which have risen about 25% over the past 12 months, on Tuesday fell about 4% to around £1.10 to give the company a current stock market value of about £104 million.

Excerpts from the interview:

It has been reported that you should sell your shares in Celtic as you are not a true fan?

This is a contemptible suggestion. I am as passionate about Celtic as any other supporter. My shares are not for sale. Brian Dempsey, in an article in The Times, is reported to be floating the idea that fans should own the club and that we have reverted back to where we were in 1994. When I think about the strength of this club today and the playing success that we have enjoyed to date, these are entirely attributable to being financially strong and being professionally managed under stable ownership. When I look back at the record of the club since 2001, we have achieved remarkable success and encountered only a few set-backs along the way. This season has been one of them, but it does not re-create the conditions of the early 1990s, as Mr Dempsey would like to have us believe.

It is said that the board is not fit for purpose. How do you react to that criticism?

One of Fergus McCann’s tenets was that the club would be run professionally and that we should never return to the position he inherited where the entire existence of Celtic could be jeopardised by mis-management and unacceptable levels of indebtedness. Celtic is and will continue to be run on a meritocratic basis by the best executives available at the time. There is no member of the Celtic board that I personally knew before they were appointed. We have maintained this policy and it has endured the test of time. In a professional manner we conduct our business behind closed doors, we don’t seek public acclaim for everything we do. Critics are in no position to judge what they cannot see.

We are very fortunate to have Ian Bankier as our chairman and he leads a diverse and extremely talented board. We could not have had a better CEO, nor a more committed Celtic supporter than Peter Lawwell. He has built a solid platform upon which our new CEO, Dominic McKay, can build. With every board appointment we make, we undertake a thorough recruitment process of researching, investigating, interviewing and negotiating, unknown to all except the Celtic board members. That will be the same process that is being implemented in recruiting our next manager.

What is your analysis of the season?

Firstly, the season is not over yet, as we are still in the Scottish Cup. However, my current thoughts are that this season has been extremely disappointing. Decision-making in football is not an exact science and I accept without qualification that we have made some wrong calls. We will endeavour to learn from those. However, the conjecture coming from some journalists, commentators and pundits that they foresaw the outcome of this season is entirely disingenuous in my opinion.

Regardless of whether we won the league or not this year, we knew that the 2021/22 season would be a transitional year for the team. A number of the existing squad would more than likely be departing or returning to their parent clubs, but we felt that, in order to give the team the best chance of success this year to achieve the overriding ambition, we should endeavour to retain these players, despite receiving a number of substantial bids. In so doing, we recognised that this would add to the recruitment requirements for the subsequent season. We recognise that we have under-performed both on and off the pitch and must do better.

When can we expect the appointment of a manager?

As with any key appointment at Celtic, there is a process which involves research, investigation, interviewing and negotiation. This process is underway and is taking place privately and when complete, the board will make a public announcement.

Who is in charge of the process?

The chairman Ian Bankier, Peter Lawwell and myself take a lead in the process, and naturally, the incoming CEO will also participate. Any decision made will require board approval.

Could you give us some idea of the type of candidate you are looking for?

We are mindful of the fact that there is a huge amount of interest and speculation among our supporters and the press. However, we have to respect the privacy of potential candidates and the integrity of the process, and so I think it would be inappropriate to make comment on the type of candidate we are looking for.