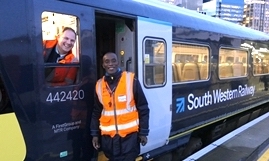 The new contracts will commence on May 30, 2021, when the current Emergency Recovery Measures Agreements (ERMAs) come to an end.

“National Rail Contracts are a new contract structure for agreements between train operating companies and the DfT and the contracts for both SWR and TPE are among the first wave of NRCs to be announced,” said FirstGroup.

“Under the NRCs the DfT will retain all revenue risk and substantially all cost risk.

“For the group’s 70% share of the First MTR joint venture for SWR the fixed management fee is £3.3m per annum and there is the opportunity to earn an additional fee of up to £9.9m which is the maximum attainable performance fee.

“For TPE the fixed management fee is £2.3m per annum and there is the opportunity to earn an additional fee of up to £5.2m which is the maximum attainable performance fee.

“The NRCs achieve a more appropriate balance of risk and reward between FirstGroup and the Government.

“There are limited scenarios in which this contingent capital can be called upon, primarily in the event of early termination of the contracts by the operator …

“As previously announced, the West Coast Partnership ERMA is in place until the end of March 2022 and we are discussing an NRC with duration of up to 31 March 2032 (with the core and extension periods to be determined).

“The existing Emergency Measures Agreement for GWR has already been extended to June 2021, and the underlying GWR direct award runs to 1 April 2023 with an extension option of up to one year.”

FirstGroup CEO Matthew Gregory said: “We welcome the announcement today by the Secretary of State of a plan for the future of the UK rail industry with the expertise, innovation and experience of private sector rail operators at the heart of the model.

“The National Rail Contracts agreed for SWR and TPE leave us well-placed for lower risk, cash generative rail operations on those two networks.

“We have long called for this transition to a new contract structure with a far better balance of risk and reward, and which benefits customers by a clearer focus on performance, including the introduction of a new set of passenger service metrics.

“As the country begins the process of ‘building back better’ the essential role of public transport has never been clearer and our leading position in the sector means that we have an important role.

“Our rail services have a vital part to play in driving economic growth, combating climate change and supporting the development of vibrant and sustainable communities.”