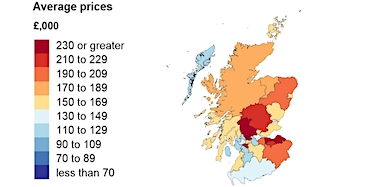 Detached houses in Scotland showed the biggest price increase out of all property types, rising by 21.3% in the year to £320,000.

House prices increased over the year in all of Scotland’s 32 local authority areas.

The lowest annual growth for the year ending August 2021 — not including Shetland Islands — was recorded in the City of Aberdeen, where average prices increased over the year by 7.6% to £150,000.

In August 2021, the most expensive area to purchase a property was City of Edinburgh, where the average cost was £314,000.

In contrast, the cheapest area to purchase a property was East Ayrshire, where the average cost was £114,000.