Baillie Gifford’s £1 billion Schiehallion Fund was the best performing investment trust of 2021 with a price total return of 103.3% as private equity trusts dominated performance, according to Quilter Cheviot analysis.

Baillie Gifford’s Schiehallion Fund seeks to generate capital growth for investors “through long-term minority investments in later stage private businesses that the company considers to have transformational growth potential and to have the potential to become publicly traded.”

Nick Wood, head of fund research at Quilter Cheviot, said: “2021 was a year dominated by the reopening of the global economy as a result of the successful vaccine rollout, followed swiftly by the emergence of new variants and reminders that the Covid pandemic is a long way from being resolved.

“No more was this the case than in the investment trust market, where private equity dominated the performance tables following strong growth in the previous 12 months.

“We also saw a number of specialist vehicles, including Vietnam Holding and Ashoka India, both focused on the individual Emerging nations, which managed to withstand the contagion risk spreading from China in the form of the Evergrande defaults and economic and regulatory tightening.

“Comparing the winners within the trust world versus open-ended, two things jump out.

“Firstly, the winners in the trust space include a significant number of illiquid assets, highlighting the benefit of the structure, and investments that largely cannot be held comfortably within the open-ended space.

“It is also noticeable that the winners in the trust space were some ways ahead of those within the open-ended world, at least considering the top 10, highlighting the opportunities out there for investors who are a little more investment structure agnostic, or consider trusts to be beneficial to access some areas of the market.

“At the other end, like the open-ended world, three trusts investing in China made the list, as did two Biotech focused trusts.

“Baillie Gifford will naturally go through some difficult periods as a result of their growth style of investing, but it remains a quality investment house with first rate research capabilities.

“It would be no surprise to see these trusts bounce back in 2022, although maybe not delivering the same level of performance as their Schiehallion stablemate.” 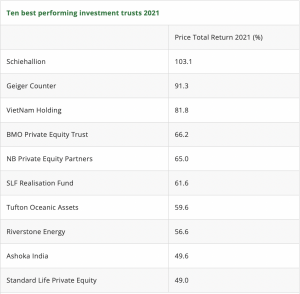