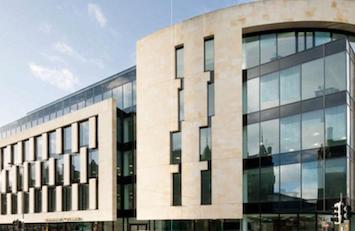 The Edinburgh and Glasgow office markets recovered in 2021, with leasing volumes at more than 1.2 million sq ft and investment across both cities reaching £571 million, according to real estate services specialist JLL.

Grade A office space in Edinburgh remained in high demand, with vacancy at just 1.1% by the end of the year.

However, a surplus of Grade B and Grade C space pushed Edinburgh’s overall vacancy rate up to 5.2%.

The capital was buoyed by £320 million of investment — in line with the 10-year average of £316 million.

The largest transaction in Q4 was CBREGI’s purchase of Exchange Place 1 for £59 million.

Glasgow leasing volumes reached 496,700 sq ft in 2021, which comfortably exceeded the previous year but remained down on the 10-year average.

Overall vacancy increased to 6.9% in Q4, although Grade A space remains scarce, with vacancy standing at just 1.8%.

Investment of £251 million in Glasgow was the highest seen since 2018 and only marginally below the 10-year average of £263 million.

Alasdair Humphrey, head of JLL in Scotland, said: “The office markets of the Big Six act as an important barometer for the health of the regions, and these figures point to a positive post-Covid resurgence in Scotland which we’re seeing carry through from the second half of last year into 2022.

“There is strong momentum in the Edinburgh and Glasgow markets, which are now close to pre-pandemic occupancy levels.

“Real estate and infrastructure investment are at the centre of rebalancing the UK’s unequal economic geography, and surpassing pre-pandemic occupancy levels this year is likely to spell good news for local growth.”