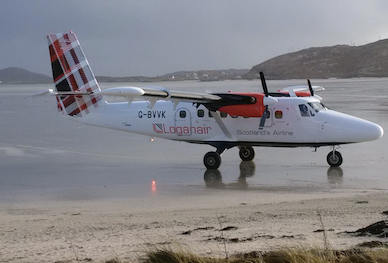 The chief executive of Loganair has confirmed in a LinkedIn post that the company is up for sale.

Loganair CEO Jonathan Hinkles wrote that shareholders Stephen and Peter Bond are working to find a “new custodian” for the airline.

Hinkles wrote: “We shared the news yesterday with our whole team that, after 25 years of involvement in Loganair including the last 10 years as sole owners, our shareholders Stephen and Peter Bond are working to find a new custodian for Scotland’s Airline.

“It’s for the best of reasons – Stephen is now 72 years of age and wishes to step back from day-to-day business.

“That’s really the beginning, middle and end of the story right there.

“What is very clear is that Stephen and Peter Bond are committed to finding the right future owner for Loganair – very much its keeper for the next generation, just as they themselves have been.

“With Loganair performing strongly as the UK’s largest regional airline, our fleet renewal programme entering the home straight and soon to publish annual results which surpass those of any other UK airline which has reported thusfar, our airline is firmly set on the most positive of paths for the future.

“As well as continuing to run a great airline which is also a great business (and you need to be both!), my responsibility to our 840-strong team and to the many communities that Loganair’s services support will be as important as ever.

“We have exciting times ahead, and we’ll keep working hard to look after our team and our customers.”