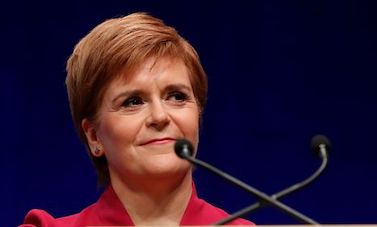 SNP leader Nicola Sturgeon told the party’s conference on Monday that investment of £20 billion would be delivered by a new fund in the first decade of Scottish independence.

The First Minister said Scotland’s remaining oil revenues and its new borrowing powers as an independent country would be used to set up an independence investment fund.

“If the past three weeks have taught us anything it is that a country’s fiscal and monetary policy must be sustainable and command confidence,” Sturgeon told the conference.

“We will not shy away from that.

“Our approach to borrowing with the new powers of independence will be responsible and for a purpose.

“Let me give one example of that – a central proposal in the paper we will publish next week.

“We propose to invest remaining oil revenues and use our borrowing powers, not to cut tax for the richest, but to set up an independence investment fund.

“The Building a New Scotland Fund will deliver up to £20 billion of investment in the first decade of independence.”

Sturgeon said that in practical terms: “A fund like this could support a massive programme to decarbonise housing, cut fuel bills and reduce fuel poverty.

“It could finance the building of thousands more affordable homes.

“Invest in local renewable energy projects, helping communities own assets and wield more influence over their use.

“It will help the transition to Net Zero.

“And kick-start the sustainable economic growth so important for our newly independent nation.

“Combining Scotland’s abundant resources with the powers of independence to benefit this and future generations.”