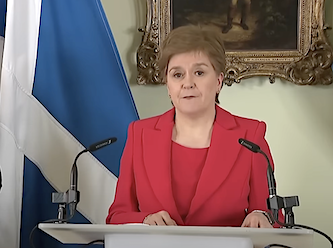 Sturgeon said the paper called “Building a New Scotland: A stronger economy with independence” sets out plans “to make the economy work for everyone and forge a different path to the Brexit based UK economic model that, as outlined in the first paper, is poorer and more unequal than comparable independent countries.”

The paper outlines the new institutions that would be set up to manage the Scottish economy, including an independent Scottish Central Bank and a new Debt Management Office.

“Credible and responsible fiscal rules on borrowing and other key measures will be independently assessed by an enhanced Scottish Fiscal Commission,” said the Scottish Government.

Sturgeon said: “The UK economy is fundamentally on the wrong path and there is no real alternative on offer within the Westminster system.

“The establishment consensus on Brexit – despite the harm it is causing – illustrates that.

“For Scotland, not being independent means we are being dragged down the wrong path too: one people in Scotland did not vote for.

“To build a more stable, sustainable economy – with fairness and human wellbeing at heart – independence is therefore essential.

“That is the fundamental point we make in this paper. Independence is not an abstract argument separate from people’s daily lives.

“It has at its heart the ambition – and crucially, it equips us with the essential tools – to build a fairer, wealthier, greener, happier country.”

Sturgeon added: “Scotland has an abundance of skilled people, innovative businesses, and natural resources. We have everything it takes to be just as successful as comparable independent European countries.

“Our analysis from the first paper in the Building a New Scotland series shows that a dynamic economy and social justice go hand in hand. Each makes the other stronger.

“Scotland’s economy is one of the best performing in the UK – however the UK economy, particularly post-Brexit, is now lagging behind many EU and international comparators.

“The UK economic model is demonstrably failing and increasingly holding Scotland back. Independence is now essential to build an economy that works for everyone.

“The paper we are publishing today will help people make a clear, informed choice about independence and how we can forge a path towards becoming a fairer, greener, wealthier country.”

Scottish Conservatives economy spokesperson Liz Smith: “The SNP are still unable to provide details about how our currency would work, who would pay our pensions, and how we would cope with the potentially devastating effects of a hard border with the rest of the UK.

“Absurdly, they expect the Scottish public to vote on independence without any of these crucial questions being answered.

“The fact is that the SNP’s economic case for independence is as weak as ever – this is a lightweight SNP pamphlet dressed up as a glossy Scottish Government paper.

“These proposals would be a leap in the dark that would directly endanger jobs, wages, savings and investment.”

He added: “The SNP are trying to sell Scotland a pig in a poke. It’s completely the wrong priority at the worst possible time for Scotland.

“Nicola Sturgeon should be using government resources to help struggling families instead of to push for another divisive and unwanted referendum.”

Scottish Labour finance spokesman Daniel Johnson: “The SNP need to drop the spin and come clean with people about the catastrophic reality of their economic plans.

“Despite wasting 15 years in government peddling the same old agenda, they still can’t answer even the most basic questions.”

Scottish Liberal Democrats leader Alex Cole-Hamilton called the plan a “recipe for years of chaos,” accusing Sturgeon of making “the same pie-in-the-sky promises as the Brexiteers” and threatening to “cut Scotland off” from its biggest trading partner.

“She refused to admit her proposals would leave Scotland outside both the UK and the EU for an untold number of years,” he added.

“Nor can she tell the public how Scotland would build up the necessary foreign currency reserves for her plans to ditch the pound.”

Neale Hanvey of Alba: “Alba welcome this paper which usefully sets out Scotland’s economic strengths and the massive potential to grow our economy and create a fairer society with the powers of independence.

“This stands in stark contrast with the evident weaknesses of the UK and of Scotland continuing to be part of a sinking ship.

“That should be the backcloth to an unanswerable economic case but this Scottish Government document still falls short in key points of policy detail.

“There is still some way for the Scottish Government to travel in distancing itself from all of the disastrous SNP Growth Commission proposals, including the bizarre ‘solidarity payment’ which continues to live on in this document.”

David Phillips, Associate Director at the UK’s Institute for Fiscal Studies: “The Scottish Government’s new paper on post-independence economic plans makes all the right noises on how the public finances would be managed, emphasising achieving fiscal sustainability.

“But, it skirts around what achieving sustainability would likely require in the first decade of an independent Scotland: bigger tax rises or spending cuts than the UK government will have to pursue.

“This is because while high oil and gas prices means Scotland’s underlying budget deficit this year will be fairly close to that of the UK as a whole, this is likely to prove temporary: oil and gas prices are expected to fall back, and North Sea production is on a long-term downward trend. Scotland’s public finances are therefore expected to weaken relative to the rest of the UK again unless onshore economic growth could be boosted to grow revenues from income tax, VAT and the like.

“That’s not impossible and the Scottish Government has rightly highlighted the UK’s poor productivity performance, including relative to many of the small northern European countries that it is suggested Scotland could emulate.

“However, boosting productivity and growth is far from certain and would be easier said than done. Experience from recent weeks suggests the markets may not look favourably on fiscal plans built on the uncertain hope of a substantial future boost to growth.”