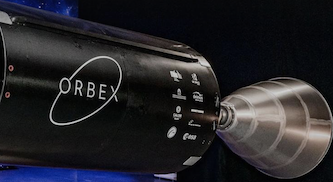 Forres-based spaceflight company Orbex said it has secured £40.4 million for its Series C funding round, led by new investor the Scottish National Investment Bank with £17.8 million.

The new round of funding will allow the company to scale up its resources as it counts down to the first vertical launch from UK soil, as well as unlocking additional funding to support future projects.

Orbex recently revealed its “Prime” rocket in its final form, making it the first full orbital micro-launcher to be unveiled in Europe.

Prime is a 19-metre long, two-stage rocket designed to transport small satellites weighing up to 180kg into low Earth orbit.

Orbex´s rocket will launch from the Space Hub Sutherland spaceport near Tongue on the North coast of mainland Scotland, which is expected to be the UK´s first operational spaceport. Orbex applied for a space launch licence from the UK´s Civil Aviation Authority in early 2022.

“Orbex has made significant progress to get to this point, with the invention of ground-breaking, innovative technology, the rapid development and testing of the launch vehicle, the expansion of our manufacturing footprint in the UK and Denmark, the creation of the UK´s first orbital spaceport in mainland Scotland, and the growth in customers from the UK, Europe and America signing up to launch dedicated payloads with Orbex.

“These results have only been made possible by the maturity and dedication of the entire Orbex team, who bring a huge amount of skill and experience to their tasks from a wide variety of industries, launch systems and spacecraft.

“This significant new funding round is testament to the work of that team and will allow us to continue to build Orbex towards our long-term goal of establishing a reliable, economically successful and environmentally sustainable European space launch business.”

“With Orbex, we will have a rocket assembled in Scotland, launching from Scotland and likely transporting satellites built in Scotland into orbit.

“This investment is a great example of the Bank working with other investors to support scale-ups in Scotland and aligns with our mission to invest in innovation and the industries of the future.

“We’re building a full end-to-end commercial space ecosystem in Scotland and we’re proud to play our part in this funding round, which will help deliver jobs and prosperity for the space sector and the wider economy.”