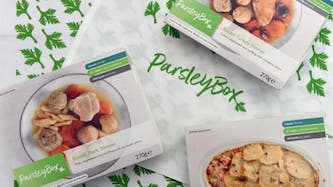 Edinburgh-based ready meals firm Parsley Box Group plc has proposed the cancellation of its ordinary shares trading on the AIM stock market and the re-registration of the firm as a private limited company.

This follows an announcement last month by Parsley Box that it was considering “whether the company’s status as a publicly traded company continues to be in the interests of shareholders as a whole.”

Parsley Box joined the stock market in March last year at £2 per share — but the firm has suffered a torrid experience as a public company with its shares falling more than 98% to around 3p and the firm’s stock market value plummeting to around £2.4 million.

The plans to delist and go private must be approved by at least 75% of votes cast by shareholders at a December 14 general meeting.

The company said it has received irrevocable undertakings to vote in favour of the resolutions representing 35.8% of the company’s issued share capital.

The CEO of Parsley Box is seasoned investor Kevin Dorren, while its chairman is Chris van der Kuyl, one of Scotland’s most successful entrepreneurs.

“Further to the announcement of 25 October 2022, the board has assessed the various potential sources of capital available to the company to fund its medium term growth plans and, in doing so, has reviewed and evaluated the benefits and drawbacks for the company and its shareholders in retaining the admission to trading of the ordinary shares on AIM,” said Parsley Box.

“This review has focussed on a comparative assessment of the opportunities for the company to raise further growth capital in the public and private markets respectively in the next 12 months and included, amongst other things, assessment of the public market liquidity and valuation volatility of the ordinary shares and a cost versus benefit analysis of maintaining the company’s status as a publicly traded company.

“As a result of this review, the directors have concluded that the cancellation and re-registration are in the best interests of the company and its shareholders as a whole …

“To be passed, the resolution in respect of the cancellation requires, pursuant to Rule 41 of the AIM Rules, the approval of not less than 75 per cent. of the votes cast by shareholders at the general meeting.

“The resolution to approve the re-registration and the adoption of new articles also requires the approval of not less than 75 per cent. of the votes cast by shareholders at the general meeting.”