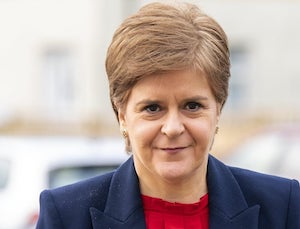 The UK Supreme Court has ruled that the Scottish government cannot hold a second referendum on independence without approval from the UK parliament.

The judgment was widely expected.

In a unanimous verdict of five judges — Lord Reed (President), Lord Lloyd-Jones, Lord Sales, Lord Stephens and Lady Rose — the UK Supreme Court ruled the Scottish government could not pass legislation paving the way for an advisory second referendum without the approval of the UK parliament.

Sturgeon repeated her vow to campaign in the next UK-wide election, currently expected to be held in 2024, solely on a platform of whether Scotland should be independent, making it a “de facto” referendum.

“We must and we will find another democratic, lawful and constitutional means by which the Scottish people can express their will,” said Sturgeon.

“In my view, that can only be an election.

“As of today, democracy is what is at stake … It is now about whether or not we even have the basic democratic right to choose our own future.”

Sturgeon added: “Let’s be absolutely blunt, a so-called partnership in which one partner is denied the right to choose a different future, not even to ask itself the question cannot be described in any way as voluntary or even a partnership at all …

“Achieving independence is not just desirable, it is essential if Scotland is to escape the disaster of Brexit, the damage of policies imposed by governments we do not vote for and the low growth high inequality economic model that is holding us back …

“I think it’s safe to predict that this will not be my last words on the matter.”

UK government’s Scotland secretary Alister Jack: “People in Scotland want both their governments to be concentrating all attention and resources on the issues that matter most to them.

“That’s why we are focused on issues like restoring economic stability, getting people the help they need with their energy bills, and supporting our NHS …

“As the Prime Minister has made clear, we will continue to work constructively with the Scottish Government in tackling all the challenges we share and face.”

Former First Minister and Alba Party Leader Alex Salmond: “The decision of the Supreme Court today is the result of a bad gamble that hasn’t paid off.

“What should have happened was the Scottish Parliament should have passed the legislation for an independence referendum and forced the UK Government to be the ones that challenged it.

“Real Parliaments don’t ask for permission to implement their democratic mandate. Although the verdict is hardly a surprise it now begs the question of what is the democratic route for Scots to determine their own future?

“Unionists should beware in their glee as the lesson of history is that you can postpone democracy but you cannot deny it.

“The Scottish Government now has the responsibility to find a way forward. They have led the national movement down a complete blind alley to the Supreme Court which astonishingly has gone as far as rejecting Scotland’s right of self determination.

“That’s what happens when you go to the wrong court with the wrong question.

“Today‘s decision must now be the spark that ignites a new popular movement like that of the Yes campaign of 2014. ALBA Party have led the way on parliamentary interventions in the UK Parliament and we call on others to join us. This must also be matched by a civic campaign of protest and action across Scotland and an Independence Convention to steer the campaign.

“Scotland’s future must be placed back in Scotland’s hands – not a parliament or a court in London.”

Dundee City Council leader John Alexander: “It sharpens the mind on what the problem is …

“It’s that we don’t have the respect or ability to make our own decisions.

“It makes a mockery of what the UK Government espouses on the global stage about democracy. So what do we do next?

“What we need to do is ensure every single democratic process is explored.”