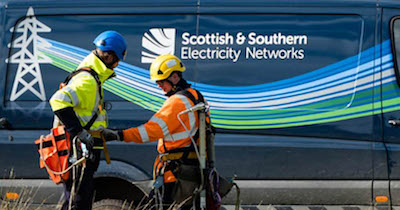 By Mark McSherry — SSE plc, the Perth-based electricity infrastructure giant, confirmed on Friday it has reached agreement to sell a 25% minority stake in its electricity transmission network business SSEN Transmission to Ontario Teachers’ Pension Plan Board for £1.465 billion in cash.

SSE said the deal “will help unlock significant growth” in both the transmission business and across the wider SSE group.

It said the transaction reflects both the current value and significant growth potential of SSEN Transmission as one of Europe’s fastest growing transmission networks.

SSE said it continues to believe SSEN Transmission has a central role to play in meeting net zero and bolstering the UK’s energy security by unlocking the vast renewable resources in the north of Scotland and transporting that homegrown low carbon power to demand centres further south.

It said proceeds of the sale will support the significant growth SSE continues to see in SSEN Transmission and further growth opportunities across SSE’s other core businesses, while ensuring an attractive balance of capital allocation across the group.

The Perth company said the sale of the minority stake will allow SSE as the majority shareholder to retain control in relation to operating and managing the business, with Ontario Teachers’ to be proportionately represented on SSEN Transmission’s board of directors.

SSE’s Finance Director Gregor Alexander will be chair of this new board and Rob McDonald will continue in his role as managing director for SSEN Transmission, along with other key members of SSEN Transmission’s leadership team.

“To help cover the future long term funding requirements and the working capital of SSEN Transmission, and as referenced in SSE’s 2022/23 Interim Results, a new £750m revolving credit facility has been put in place,” said SSE.

“This facility will support SSEN Transmission’s ongoing capital expenditure investment programme that is required to deliver its ambitious growth plans.”

The transaction constitutes a class 2 transaction for the purposes of the UK Financial Conduct Authority’s Listing Rules and, as such, does not require SSE shareholders’ approval.

SSE added: “The transaction follows SSE’s announcement on 17 November 2021 of its intention to extend the partnering approach that has been successful in SSE Renewables to its core electricity distribution and transmission network assets through the sale of minority stakes in both businesses as part of SSE’s fully funded Net Zero Acceleration Programme (NZAP).

“The stake sale process for SSE’s electricity distribution business is expected to commence in early 2023.

“The transaction is based on an effective economic date of 31 March 2022, and total cash proceeds of £1,465m for the 25% stake are expected at completion.

“The transaction is expected to complete shortly.

“These shareholder loans to SSEN Transmission will remain in place and are expected to be replaced with external debt as they mature.”

SSE Finance Director Gregor Alexander said: “We are delighted to agree a transaction that will help unlock the full potential of our growing electricity transmission business, which remains core to our strategic direction as a clean energy champion specialising in electricity infrastructure.

“As we set out in our Net Zero Acceleration Programme last year, due to the scale of potential growth and the associated investment required across SSE’s businesses, including in electricity networks, bringing in minority partners will balance capital allocation and support further growth, creating greater long-term value for all our stakeholders.

“In Ontario Teachers’ we have a strong long-term partner who we have worked with successfully over the past 18 years and, whilst we will retain operational control, they will be critical to SSEN Transmission’s ongoing future success.”

SSEN Transmission MD Rob McDonald said: “With the north of Scotland home to the UK’s greatest resources of renewable electricity we have a critical role to play in helping deliver the UK and Scottish Governments net zero commitments.

“Our investments will also be key to securing the UK’s future energy independence through enabling the deployment of homegrown, affordable, low carbon power.

“With significant growth forecast in transmission, bringing in Ontario Teachers’ as a minority stake partner will help fund our ambitious investment plans as we continue to deliver a network for net zero emissions across the north of Scotland.”

Charles Thomazi, Head of EMEA Infrastructure & Natural Resources at Ontario Teachers’, said: “SSEN Transmission is one of Europe’s fastest growing transmission networks. Its network stretches across some of the most challenging terrain in Scotland – from the North Sea and across the Highlands – to deliver safe, reliable, renewable energy to demand centres across the UK.

“We’re delighted to partner again with SSE and are committed to supporting the growth of its network and the vital role it plays in the UK’s green energy revolution.”

Morgan Stanley and Rothschild and Co acted as SSE’s joint financial advisors and Freshfields Bruckhaus Deringer LLP acted as legal advisers to SSE on this transaction.

Ontario Teachers’ was advised by Evercore as sole financial adviser and by Linklaters LLP as legal adviser.