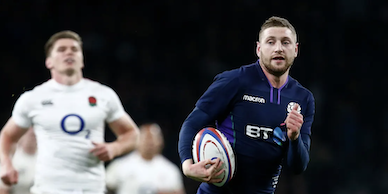 Bath Rugby has confirmed the signing of Scotland fly-half Finn Russell, who will join the English club following the 2023 Rugby World Cup after four successful seasons at Racing 92 in France.

“Russell’s playmaking ability and excellent kicking game have seen him become one of the most lauded players in the northern hemisphere,” said Bath.

“He will join a Bath squad which has already seen recent recruits Ted Hill, Ollie Lawrence and Alfie Barbeary commit for the long term.”

Bath Head of Rugby Johann van Graan said: “Finn is a world-class player who will significantly add to our squad on and off the field.

“To be able to attract players of Finn’s quality to Bath Rugby is a credit to how far we have come as a club and a group since 11 July.

“We look forward to welcoming his experience, leadership and expertise to the Blue, Black and White.”

During his time at Racing 92 in France, Russell has scored 272 points in 66 games.

Russell said: “To be able to join such a historic, well-supported club is really exciting.

“I know players at Bath who speak highly of the environment, and the direction the club is going in is something I want to be a part of.

“I’ve enjoyed my time at Racing 92 and I’ve learned a lot.

“Now is the right time for a new challenge, in a new league, with the aim of moving Bath back to the top end of the Premiership and competing for domestic and European titles.”