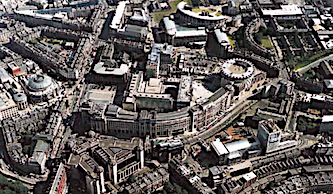 The latest Scottish Property Federation (SPF) analysis of commercial property sales figures shows a rebound in the total value of sales in Scotland in the third quarter of 2019.

In total, £1.2 billion was transacted in the quarter, nearly double the total value of commercial property sales in the second quarter of this year.

Edinburgh was the key driver with sales in the capital more than tripling to £462 million in Q3 2019 when compared to the previous quarter.

Partly as a result of several high-value transactions, Edinburgh dominated the commercial property market in Q3 2019, with a 38% share of the Scottish market by value.

Glasgow also continued positive momentum with £216 million transacted in the city during Q3 2019.

David Melhuish, director of the Scottish Property Federation, said: “Q3 2019 was a strong quarter for commercial property sales; however, it comes on the back of a subdued first half of 2019, and the current one-year rolling total is still 3% lower than in the same period in 2018.

“We will be watching closely to see if this momentum can continue in the last quarter of the year, against the headwinds of continued political uncertainty and low economic growth.”

Cameron Stott, director at commercial property agency JLL, added:  “The large volume by value has been driven by substantial asset sales which have offered investors either long secure income or the asset is in a prime location.

“This volume also reflects how attractive Edinburgh continues to be notwithstanding the political uncertainty.

“It is also interesting to note the continued interest from foreign investors no doubt seeing the UK as value for money but also benefiting from a more attractive yield compared to many other European cities.”

Scottish commercial property investment volumes also rose sharply on both a quarterly and an annual basis, according to property data experts CoStar UK.

CoStar also highlighted that Scotland attracted more investment than any other UK region outside of London and the South East, with volumes heavily supported by a continuing flow of capital from overseas.

It was reported that foreign investors were behind over half of all acquisitions by value, with European and American investors involved in sizeable purchases.