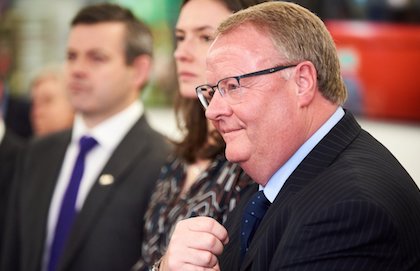 Industry body Scottish Financial Enterprise (SFE) said on Tuesday its chief executive Graeme Jones will retire at the end of this year after five years at the helm.

The search for a new CEO will be carried out by Edinburgh executive recruitment firm Carlyle.

It estimates the Scottish financial sector manages over £800 billion of funds and accounts for 24% of all UK employment in life assurance and 13% of all UK banking employment.

“Since joining SFE in January 2016, Graeme has overseen the development and implementation of an ambitious five-year strategy to help strengthen the industry, has grown the membership by 25% and constructively engaged with the UK and Scottish Governments on behalf of members as they face the uncertainty of Brexit and now the coronavirus crisis,” said SFE in a statement.

“Graeme has harnessed a collaborative, coordinated and inclusive approach during his time at SFE to encourage members to participate and achieve tangible results in the strategic initiatives including the establishment of FinTech Scotland, the award-winning Fast Track work readiness hubs, the inspiring Unified Schools Programme and the launch of the first industry-wide prospectus to promote the strength and collective might of Scotland’s financial services expertise.

“The SFE Young Professionals network has also gone from strength-to-strength having amassed more than 300 members since it was launched during Graeme’s tenure.”

SFE chairman Philip Grant said: “Graeme’s leadership has transformed SFE and he will be sorely missed by me, the board and his team when he retires in December 2020.

“Graeme has built the firmest of foundations from which we can continue to develop and build the capability and impact of SFE in representing the interests of our members and developing the value of financial services for Scotland.

“The SFE board has launched a search for Graeme’s successor. In the meantime, I look forward to working closely with him and the SFE board in the months ahead.”

Jones said: “I have thoroughly enjoyed my time at SFE and I’m proud to be leaving it with strong and secure foundations as it enters a new chapter.

“I would like to thank the SFE Board for their enduring support over the past five years and my team for their hard work, commitment and guidance.

“Our members are at the heart of SFE and I would like to thank them for their commitment on driving forward our strategic initiatives and contributing to the overall success of SFE.

“I very much look forward to working with you all throughout the rest of 2020 and supporting a seamless transition as SFE enters a new cycle under new leadership.”

Before joining SFE, Jones held a number of senior posts in some of the UK’s largest financial services organisations, including Senior Partner – Banking and Financial Services at Experian, Head of Distribution for Aviva, Head of Regulated Sales at RBS Group and Manager of Strategy and Operations at Standard Life.