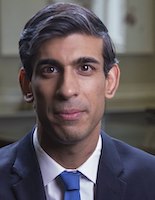 Rishi Sunak will become the next prime minister of the UK after he won the contest to be the leader of the UK Conservative Party.

Sources close to Sunak said he is not keen to hold a general election.

He faces the huge economic problems and the growing £2.45 trillion debt of the UK as he takes up the post — and he is expected to impose deep spending cuts.

Sunak said the UK is facing a “profound economic crisis.”

Sunak is a multi-millionaire former hedge fund boss and he is also a former Goldman Sachs analyst.

Southampton-born Sunak will be the UK’s first prime minister of Indian origin.

After graduating from Oxford University, Sunak went to Stanford University in the United States where he met his wife Akshata Murthy, whose father is Indian billionaire N. R. Narayana Murthy, founder of outsourcing giant Infosys Ltd.

Susannah Streeter, senior investment and markets analyst at Hargreaves Lansdown: “Gone are the days when Rishi Sunak was prepared to open the government coffers up to see the UK through a crisis. The pandemic spending spree is well and truly over and the former Chancellor will take the top job in the guise of a strict and austere headteacher.

“He will be determined not to see the bond market run amok again, threatening the country’s financial stability.

“He will be revelling in the fact that his curriculum of higher taxes and curtailed spending, which he preached on the campaign trail, is already being followed.

“However, it’s likely he will take an even harder line now on government budgets, given the punishment threatened to be handed out again comes in the form of much higher government borrowing costs. He will also want to show he is co-operating with the Bank of England by being ultra conservative fiscally in a bid to tame high inflation.

“Ties of loyalty to Boris Johnson still run deep though, and Rishi Sunak will find it hard to shake the traitor tag attached at the time of Johnson’s downfall. Garnering support across a divided party for highly unpopular spending cuts will be a hard task.

“He is likely to stay highly reliant on the hard Brexit wing of the party for support, which is likely to mean that hopes of a softening approach in talk with the EU on trade are likely to be wishful thinking.

“Rishi Sunak is set to stay a Brexiteer through and through and is also expected to continue to take a hard line on immigration, despite the struggles of businesses grappling with intense labour shortages.

“However, there may well be more progress with an Indian free trade agreement, which was put on ice, following a row over student visas. It’s likely he will push hard for a breakthrough, given the dearth of any positive news on the trade front for the UK.

“He is also set to style himself as a tech evangelist Prime Minister, given this record in funding tech start-ups while at the Treasury. With his experience as a hedge fund manager and the time he’s spent in California, right in the heart of the big tech industry, he will be expected to give a rocket boost to home grown tech talent.

“This will be no quick fix though, and new tech listings are likely to still be few and far between in the UK given the risk premium still attached to UK assets.”

“The new prime minister needs to confirm their leadership team as soon as possible and provide clarity on their strategy for stabilising the economy and their policy priorities.

“The property industry stands ready to work with Rishi Sunak in creating a thriving economy and addressing regional inequalities through the delivery of new homes, work and leisure spaces that are essential to revitalising our towns and high streets.”

Institute for Fiscal Studies director Paul Johnson: “One of the problems I think that the new prime minister and his new chancellor face is that, given all the uncertainty that’s been created over the last few weeks, they may have to make more difficult decisions than they otherwise would have had to.

“Because the markets are still somewhat spooked and they are going to be wanting to see some clear and decisive action, perhaps more than they would have required (if) we had not had all this upset over the last few weeks.”

AJ Bell financial analyst Danni Hewson: “Markets have signalled Rishi Sunak will be given time to deliver, with gilt yields falling and the British economy getting a tentative second chance to get back on track.

“But there’s no getting away from the scale of the challenge that faces the new prime minister.

“The last few weeks have left the UK economy badly bruised, and the volatility of the pound today lays bare the huge task ahead.”

Angela Rayner, deputy leader, UK Labour Party: “The Tories have crowned Rishi Sunak without him saying a word about what he would do as PM.

“He has no mandate, no answers and no ideas.

“Nobody voted for this.

“The public deserve their say on Britain’s future through a General Election. It’s time for a fresh start with Labour.”

deVere Group CEO Nigel Green: “The pound will edge higher and gilt yields lower in response to Rishi Sunak’s ‘coronation’ by Conservative colleagues to be the party leader and PM …

“Sunak is seen as having a safer pair of hands than his predecessor, with his constant warnings about the disastrous consequences of Liz Truss’s economic policies being proven correct.

“However, we expect the current relief rally of the markets will be over sooner rather than later because the UK still faces a storm of economic problems.

“Against this backdrop – and because many in his own party and in the country blame him for Boris Johnson’s departure which led to Truss’s premiership – he might find it hard to find unity and push ahead with the fiscally cautious agenda he seeks and that markets crave.

“In addition, the massive loss of credibility suffered by the UK cannot be regained all that rapidly. U-turns and abandoning landmark economic policy after economic policy does not inspire investor confidence and trust. UK financial assets currently remain hugely unattractive for investors …

“The markets will initially give him the benefit of the doubt. The really interesting question will be, for how long?”

HYCM currency analyst Giles Coghlan: “With Rishi Sunak named as the UK’s third prime minister in three months, the question now is whether today’s events will mark the beginning of a turn higher for the GBP as confidence returns in the Government’s fiscal plans.

“However Sunak’s premiership unfolds, there are likely to be more difficult times ahead for the UK economy as it grapples its way out of a worsening downturn and even the prospect of a general election – upheaval which could derail the markets further.

“That said, there is one aspect of help for the GBP that is often overlooked. On the other side of the Atlantic, a slowdown in Federal Reserve policy would likely help lift the GBP as much, if even not more, than UK fiscal policy.”

Sarah Coles, senior personal finance analyst at Hargreaves Lansdown: “This isn’t the same Rishi Sunak who gave Santa a run for his money during the pandemic. He’s going to have an incredibly tight hold on the purse strings. Jeremy Hunt is likely to stay at Number 11 with his mantra of tough decisions and spending cuts. It means we may not be able to rely on extra help when we’re facing horrific price rises next April.

“It was partly Sunak’s commitment to keeping a lid on spending, and higher levels of taxation that persuaded Conservative Party members that there had to be an easier answer during the last leadership election. The short and messy premiership of Liz Truss may well have cemented the opinion that right now there’s no alternative.

“Anyone who relies on benefits to make ends meet will be crossing everything that Sunak’s previous commitment to uprate benefits with inflation in April will stand the test of time. However, given that his Chancellor has thrown the uprating into doubt, there are no guarantees at this stage.

“Those on the lowest incomes have been hit hardest by rocketing prices, so have been left with impossible challenges. If benefits don’t keep pace with inflation in April, this will make life even more impossible. On the other side of the balance, Sunak will be dealing with a divided party, nervous about re-election. It’s going to make it more difficult for him to pass legislation which is going to leave so many voters so much worse off.

“Sunak’s previous approach to energy support was the lump sums we’re receiving now. He opted for universal help, but at a far lower level than Truss subsequently introduced. Hunt has pledged more targeted support for those on the lowest incomes from April.

“This could mean more lump sums, but on a means-tested basis. If the system is developed to offer help to those who need it, this may be enough to help us through a really difficult period. However, if the line is drawn so that average earners are out in the cold, it could be devastating.

“At the same time, news emerged over the weekend that Jeremy Hunt is planning to extend the freeze on income tax thresholds into the next parliament. By 2027/28 this is expected to cost taxpayers £5 billion a year more, as millions of people are dragged into paying higher rate tax. It’s an extension of an existing policy brought in by Rishi Sunak, so while it isn’t guaranteed to happen, the change of Prime Minister may not alter any plans already in place.”

Scotland’s First Minister Nicola Sturgeon: “… I’d suggest one immediate decision he should take and one he certainly should not.

“He should call an early General Election. And he should not – must not – unleash another round of austerity. Our public services will not withstand that.

“For Scotland, of course, he becomes another PM we did not and, without doubt would not vote for even if given the chance.

“To escape the damage of Westminster governments with no mandate here, and take our future into our own hands, Scotland needs independence.”